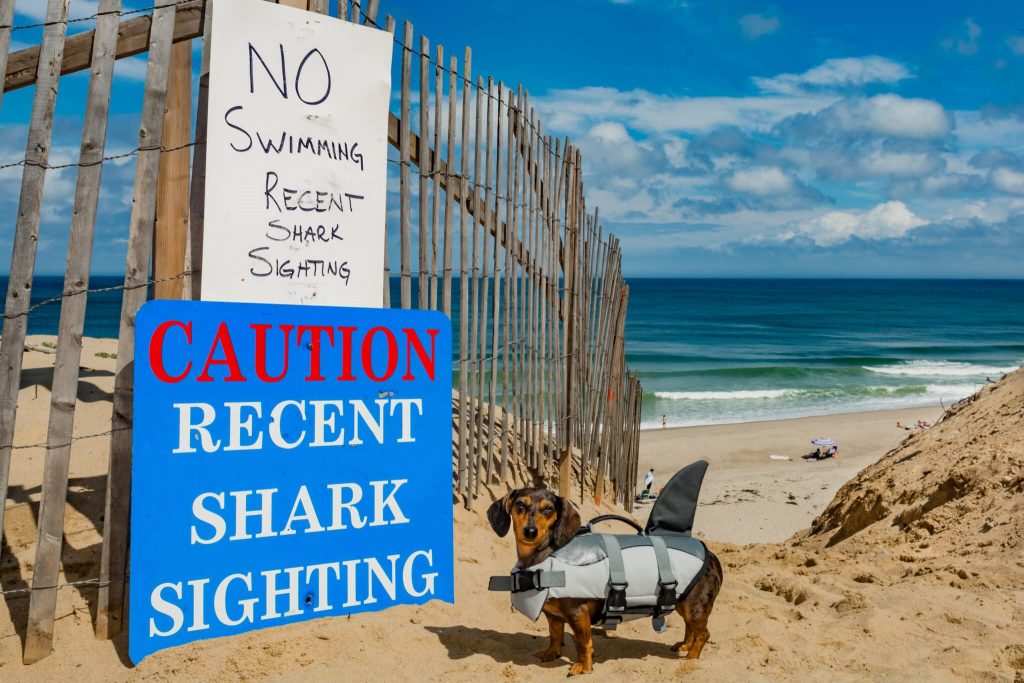 Chatham has a large population of seals, unfortunately the fuel of choice of the great white sharks! With a fast-growing population of seals, we’ve seen a rapid growth in sharks being spotted in the area. Some of our guest get excited and want to learn more about it inquiring about tours to get close to the famous summer Chatham residents. Others requests range from extreme Shark cage diving to “Where shall we go to see the sharks!”  Some are frightened and will not even go in the water. Perhaps they’ve watched all of the Jaw’s movies!

Unlike the sharks in the movies – the great whites generally are not seen as a threat to human swimmers. Swimmers should use caution and avoid beaches prohibited for swimming. Safe guards are simple things such as avoiding beaches populated with seals and not dressing in black surfer clothing. Staying near the shore that will avoid a one on one interaction with a shark.  There is no lack of variety of beaches on Cape Cod for a good swim: bay beaches, ponds and harbors.

We always recommend visiting the nonprofit Chatham Shark Center just a short drive from the Inn.  They offer videos, interactive exhibits, and even virtual-reality programs. Enjoy an up-close look at the great white sharks and learn more about the groundbreaking research that the center helps support. The journey also includes a look at the history of great white research as well as an exhibit on Frank Mundus, a legendary sports fisherman out of Long Island who not only caught the world largest great white but also said to be the inspiration for the movie Jaws.  They often perform expeditions and shark watches to tag the great white sharks. They’ve created an app called Sharktivity that you can easily install on your phone to track the sharks.

If you just want to stay on shore and get a glimpse of the offshore predators, perhaps you can purchase shark – themed memorabilia and apparel. There is not better place to shop than Chatham. Shark themed clothing can be purchased at the Chatham Clothing Bar, Island Pursuit, Tale of the Cod to name a few. Catch Jaws playing on the big screen at Chatham Orpheum and order their Jaw’s inspired cocktail. Get some shark gummies at the Candy Manor or visit a shark exhibit.

The sharks are being spotted in growing numbers and stirring curiosity, excitement and fear. Do not be afraid, nevertheless we are invading their natural habitat. Remember, the chance of getting bitten by a shark is so slim, that by being cautious about your surroundings you will avoid all the risks.

Bottom line is, enjoy our beautiful beaches and do not be afraid. The sharks are going after the seals not after humans!