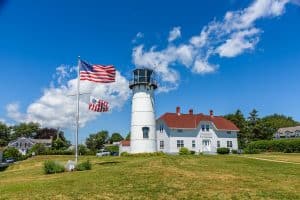 No trip to Cape Cod would be complete without visiting some of the historic lighthouses. Overlooking the Atlantic Ocean these Lighthouses give visitors the opportunity to learn more about Cape Cod’s history while enjoying beautiful ocean views. Some of the lighthouses are still in use today, while others are historical landmarks open to visitors. Cape Cod and the Islands are home to 22 stunning lighthouses. That’s one of the highest concentrations of lighthouses in the U.S.! You might be wondering why do we need so many? Cape Cod is a peninsula surrounded by water. The water can be quite dangerous for ships due to fog, rugged coastlines, the large number of sandbars, and fierce rip tides. These were the reasons for building lighthouses in the mid 19th century. The lighthouses provided two main purposes to provide navigational aid and to warn boats of dangerous areas.

Today most lighthouses have lights that run automatically, but for many years lighthouse keepers manually lit the lighthouse lantern, rang a bell, and even shot a cannon to warn boats. Each lighthouse on the Cape has its own story and character. Here are the top 5 must-see Lighthouses on Cape Cod this summer.

Located in downtown Chatham just a short 1.2 miles from the Inn this Lighthouse offers the most gorgeous ocean views on Cape Cod.  Standing 50-feet tall and sitting on a coast of more than 64 miles of water surrounded on three sides by the shoreline, Nantucket Sound, Pleasant Bay, and the Atlantic Ocean. This is why the area is described as the elbow of the Cape. Operated by the US Coast Guard, it’s one of the last remaining lighthouses in the U.S. that operates 24 hours a day. The original station consisted of two lighthouse towers, both built-in 1808. As the landscape eroded the buildings fell in the ocean several times and were rebuilt again. In 1923, one of the towers was moved to Eastham and became what is now known as Nauset Light, while the other tower stayed to become the Chatham Lighthouse that we see today. Chatham Light shares its grounds with an active Coast Guard station and a monument at the site of the former twin tower in memory of lives lost at sea during the tragic 1902 rescue. If your visit was prompted by another famous rescue the S.S. Pendleton during the town’s 1952 blizzard, as depicted in Disney’s The Finest Hours – you’ll be pleased to find that Chatham Lighthouse tours are conducted by Coast Guard Auxiliarists who can give you all the information. Most summer days you will spot half of Chatham in the lighthouse parking lot, early birds convening for summer beach yoga, day-trippers posing for a photo, and locals stopping for a quick timeout overlooking the famous Chatham break. The Lighthouse is open for tours from May through October, select Wednesdays and Saturdays from 1-3:30 p.m.

This bright white and red lighthouse is one of the most recognizable lighthouses on Cape Cod. You’ve seen it as a logo on the iconic Cape Cod Potato Chips bags. Nauset Light is located in Eastham and it’s listed on the National Register of Historic Places. It’s made from cast iron with a brick lining and stands 48 feet high. The lighthouse was built in 1877 and was located in Chatham as a twin to the one that is there today. Coastal erosion has caused many lighthouses to fall in the ocean and others are moved to prevent it. The first lights at Nauset were located in three separate towers (the three sisters). The legend is that the three white towers painted black at the tops looked to sailors like three girls wearing white dresses and black hats. As the shore eroded, they were moved and retired. They are now located on the road leading to Nauset Beach just a short walk from Nauset Light and make for a great sight to see. 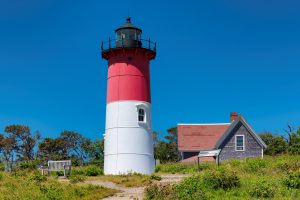 The trek to Race Point Light is almost as impressive as the Lighthouse itself. Located in Provincetown, Race Point can only be accessed by walking 45-minutes across the sand or renting a four-wheel-drive ATV or vehicle. You can call the Cape Cod National Seashore Oversand Office and obtain a vehicle permit. Soak up the scenery along the route to the lighthouse and keep an eye out for whale tails on the horizon. Due to its remote location, it’s one of the most secluded Cape Cod lighthouses. If you are looking to experience a stay in a lighthouse, Race Point is the place to go. It’s run by the American Lighthouse Foundation and offers overnight stays. Accommodations are basics bring your own linens, towels, food, and drinks. 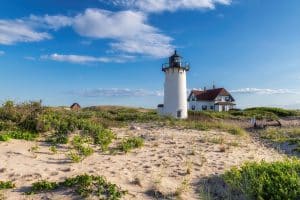 The original lighthouse in Truro has the distinction of being the first constructed on Cape Cod.  The current lighthouse, built-in 1857, replaced two earlier lighthouses and it’s the oldest currently on the Cape. The Highland Light is currently undergoing a renovation and the tower will not be available for tours until 2022. However, it’s certainly worthwhile to drive to Truro and stroll the grounds. Not only is the view of the Atlantic breathtaking but you can see the reconstruction in progress. 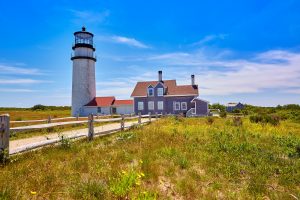 Also known as Harding’s Beach Lighthouse, the Stage Harbor Lighthouse is one of the most noticeable landmarks in this area. It is the youngest lighthouse in Cape Cod having been built in 1880. For centuries, it has provided navigational aid to all sailors. If you are wondering why it is always associated with the history of Cape Cod, it is because almost everything that has been developed in this area has a direct relation to it. Today, the lighthouse is private property, and therefore, it is not open to the public.

Visiting some of Cape Cod’s Lighthouses is one of many people’s New England things to do, and these are our favorite lighthouses on Cape Cod. All of these lighthouses are within an easy drive from the Inn. Our luxurious accommodations in downtown Chatham will be the perfect base to explore all the wonderful sites Cape Cod has to offer including these five majestic lighthouses. Call us today and let us create a custom itinerary for your upcoming trip!