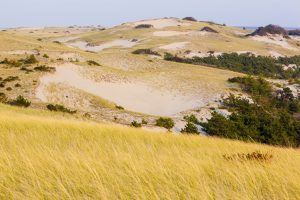 Until you’ve seen Cape Cod’s sand dunes, you haven’t truly been to the Cape! There are several ways to see the dunes, but by far the most entertaining is The Art’s Dune Tours. This tour company has been in business for over 75 years and they are going strong. It’s an experience that should not be missed.  Not only do you travel over the dunes in a Chevy Suburban, 4-wheel drive, but have a running commentary from your very knowledgeable Art’s Guide.

The first part of the tour takes you along the beach and you experience the dunes from the ocean side.  As you go along, you spy the camps that are resting just at the edge of the dunes facing the beach.  These camps are grandfathered in and are able to remain as they are. Once you leave the beach, the fun begins.

Some of the fun facts you will learn include that it was John F. Kennedy who in 1961 established the dunes as a National Park.  Originally, the area was not covered with dunes.  Instead, it was a hardwood forest.  Settlers used the hardwood to build homes/shelters in what is now Provincetown.  Once all the trees disappeared, the dunes began their life.  Winds, rain, and tide have helped create what are now the Dunes of Provincetown.

At every turn, while touring, there is something more amazing to see.  There is Rosa Rugosa everywhere.  They are not native to Cape Cod and were brought to Cape Cod shores from elsewhere.  The plants produce small reddish “fruit” known of as rose hips. The fruit themselves are bitter to the taste BUT are loaded with Vitamin C.  It’s believed that sailors, in particular, would eat them to prevent scurvy.

Beach plums also grow in the dunes.  They’re as big as a grape and have a pit nearly as big and the fruit but are sweet to the taste.  Cranberry’s also grow wild among the dunes and those lucky enough to have a permit to be on the dunes, are able to harvest the berries.

When you go along the dunes, different parts appear to be puddles from recent rain but instead are part of the water bubbling up from the natural aquifer that exists under the dunes.

In and among the dunes, you will see the incredible Dune Shacks.  The Dune Shacks are now registered as historical landmarks. When the park was established, most of the land these shacks were built on reverted to government ownership. At one point, the shacks were in danger, but through the efforts of Provincetown and Cape residents, the shacks were protected.  During your tour, you will see them and learn about their history.  The shacks have been used by artists, playwrights, photographers, and writers. The shacks have no heat, electricity, or modern conveniences.  They are rented out now by a lottery system by the week.

Being seat belted in while driving along is a must.  Several times you will experience bumps that will have you laughing out loud with glee as you are able to experience such a beautiful place with its bumps and all.  Tours run from April until mid-November. In addition to one-hour, narrated tours throughout the day, you can also reserve your place on a two-hour Sunset tour with or without BBQ, sushi, or clambake dinner. Adventure tours are also available for guests who’d like extra time to photograph the dunes; who want to combine dune touring with sailing, or kayaking.

Tours depart from Provincetown which is about one hour drive from Chatham. We recommend booking in advance, as tours operate only with a small number of passengers. Just let us know we will be happy to make all the arrangements for you! The Old Harbor Inn in downtown Chatham is ideally located just a mile away from the Cape Cod National Seashore and a short drive or walk to beaches, shops, restaurants, attractions, and popular tours. Call us today to book your stay!